london is good times with good ol mates of mine…andy jed and geoffrey…in fact the realer cats I met…London has been ill. These guys took me under thier wing and are honestly very accomplished and would all fly very funky in NYC. As they all are characters in good standing…we were in sit down mode after oing out till 530 am the past night.
We happened to all crash out at the bachelor pad where I learned theat geoffrey made Lupe Fiasco’s next album cover..although Lupe doesnt know it.

On top of that…well I alos want to remind you that not only is Geoffrey no tmaking Lupe’s next album cover (although he should) Rza also decided not to come on the tour…boo hoo hoo.
Also inspektah Deck dropepd out…Boo hoo hoo

On a postive note..although my London bridge is falling down…it really is not.

How? Just ask everyone at Matter in London last night
including this guy…who showed up! 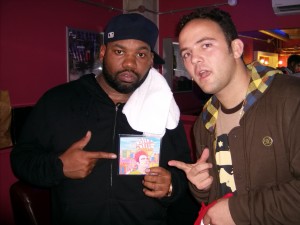 so anyways I guess Ill be ok…right??? I sure hope so…
lets see what happens later today…