How popular are you? tour bloggage 6 or 7 in milwaukee - Kosha Dillz World 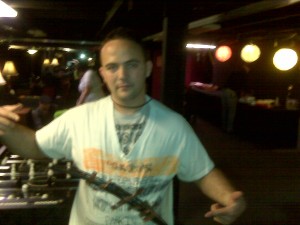 Ever since watching this guy perform (not me..im talking about skyzoo)I knew his stuff was good…but once he made this song POPULARITY I am a true fan of him. it takes many songs to really crack…and I finally feel like I can support him with this music.

goes to show you we are both on tour but it makes me think..i wasnt so popular in school, although I was a big wrestler…I wasnt like the ladies man or what have you…

While Im out on tour with Matisyahu, who is more of a world emcee, I realized in my field its not about being so popular..we (the genral populous of emcees) tried to become braggadocio in NYC hip hop ,but ..its not all about the intensity of rap life, demanding attention, (throw your damn hands up damnit, make some damn noise)
the balance of up and down really makes way for a new vision I have. I’m not gonna have people fall in love or be forced with my energy, but truely the music and show speak through to them. I think throwing hands up only works for the beginners…and this time, only certain parts of the show…if suitable to its element.
Last night Trevor did a poem that toally changed the show and i thought it really is a on going experiment for the perfect show. Every night is different.
.I just wanna be the team player…right now…its hard being a man from so many competitive sports but you have to go all the way back to the beginning of your career…where you just learned..and play your position…I think thats the way for me to become the most popular, liek skyzoo raps about on this song. Just be a good dude and do my job…liven the show up and make it crack!!! Its really an honor to be brought on for something like that. Now how popular are you?

BTW, thats me in the halloween pic. I was a milwaukee parking ticket with windshield wipers. Matisyahu ripped up the ticket and gave out the windshielf wipers on stage at the Pabst theatre.